➤ Double drama of the 60s pop dream by Ray Connolly

◼ HERE ARE TWO RADIO 4 DRAMA TREATS this Saturday 23 Sept and next at 2.30pm – first an adaptation by former Evening Standard pop columnist Ray Connolly of his 1973 film, That’ll Be the Day (which starred David Essex and Ringo Starr with cameos from Billy Fury and Keith Moon). It’s a very British coming-of-age story that keenly captures the vicissitudes of postwar austerity prevailing in the provinces as the Swinging Sixties dawned.

BBC sell: “It’s 1959 and young Jim Maclaine seems to have it all. He’s good looking and destined to go to a good university. But he’s haunted by the father who abandoned him and his mother when he was small. Is he ready for the normal life mapped out for him? Or is he restless like his old man?”

Jim’s story is followed through on Saturday 30th with Stardust. Sell: “Show me a boy who never wanted to be a rock star and I’ll show you a liar. In this sequel to That’ll Be the Day, it’s the early 1960s and Jim Maclaine is now an aspiring pop musician. He seeks out his old mate Mike, because every pop star needs a road manager. Performing to bored audiences in seedy clubs, the Stray Cats live on dreams of becoming as famous as the Beatles…” Based on the film of the same name which featured David Essex, Adam Faith, Larry Hagman and Keith Moon.

➢ Stardust at R4 – also online for a month 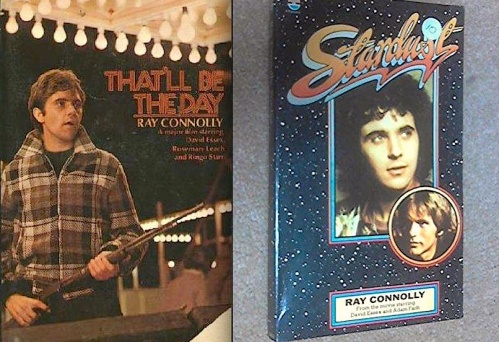 Ray Connolly’s books as spin-offs from their films

➢ Buy That’ll Be the Day as a Fontana paperback