◼ AFTER YEARS OF HINTING that his career as Spandau Ballet’s frontman was over, both during and after two world tours – all of his bombshells reported here at Shapersofthe80s – today Tony Hadley finally quit with a single tweet. Immediately, the Spandau management declared that the other four resting band members will rise like Lazarus to “move on as a band”. Er, well, perhaps, but Big Tone’s suave 6 ft 4 in (1.93 m) frame leaves not only a physical hole in the five-piece line-up, none of them especially noted for their singing voices, but an inevitable audible gap too. The four Spandau remainers provide the complementary blue-eyed soul music to a big balladeering voice, albeit described as a “dramatic warble” by Dan LeRoy at AllMusic, or that of a “top crooner” by somebody at BBC Somerset.

So who’s in the frame for the key job without which Spandau’s legacy will remain all behind them? It has to be either a dead ringer who plays to fans’ expectations, or a radical candidate who will set a new direction. One obvious contender is Paul Young as a singer who built a strong reputation for vocal interpretation during the same renaissance of British pop music that made Spandau an international supergroup. His covers of Marvyn Gaye and Jimmy Ruffin well qualify him at 61 to become the big brother of the Spandau dad-band. 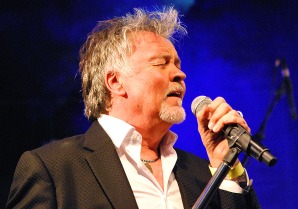 Less obvious but no less talented is Brandon Flowers, 36, former frontman of the Killers with whom he helped repopularise the sounds of the 80s in the noughties. His charismatic presence and fashion sense would sit comfortably with the Spandau heritage.

Amazingly, Will Young has reached the ripe old age of 38 in minutes seemingly, but as a respected vocalist and former Pop Idol winner he can claim four UK number-one albums and two Brit awards, while his recently acclaimed stage experience in Cabaret might bring a fresh note of theatre to Spandau performances.

But if Spandau really want to inject some millennial youth into their daddy line-up they could consider the chirpy presence of actor-vocalist Olly Alexander, 26, whose sheer energy would trigger a mighty refresh. Olly describes himself as a “real left-winger” which should sit well with the millionaire Spands whose working-class roots reach back to Islington.

Of course, they could just as easily invite on-board one of those Hadley impersonators who wowed viewers of the Saturday night talent show Stars in Their Eyes – such as Martin Lewis who sang Gold brilliantly in 1997 or Steven Houghton who sang the same number in 1998.

❏ Who would you like to see as the next vocalist with Spandau Ballet? Many fans today have been wailing how irreplaceable Big Tone is, while others have condemned him harshly for robbing his former schoolmates of their pensions. Clearly the band believe they have one more album and tour ahead of them, but who will lead them on through the barricades? Please leave your comment below.