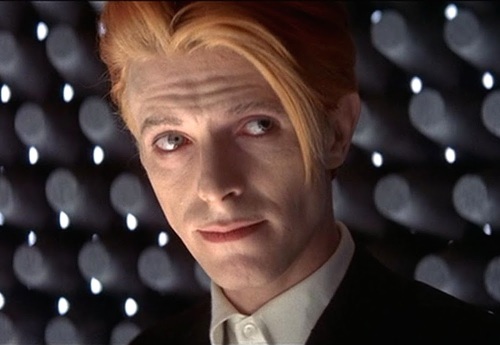 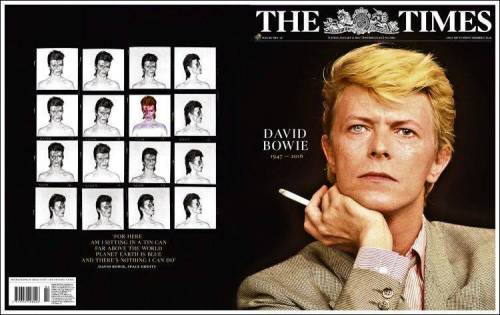 Today’s Times: the masks and the man behind them

◼ ALL 10 BRITISH NATIONAL NEWSPAPERS filled their front pages today with the death of David Bowie at 69 – and so did scores of newspapers overseas. The last pop star whose death justified such deification was Jacko in 2009; and the last British pop star to do likewise was John Lennon, in 1980. The Times of London dedicated 18 pages including an outer broadsheet wrapper to honouring Bowie, plus an editorial comment as blessing. The Guardian topped that with 20 pages, plus the most enlightened editorial comment of them all. Not only did this misfit megastar and cultural icon radiate consummate flair as a performer but he displayed “an instinctive affinity with his times”. He had a “way with the zeitgeist”.

All media, notably social media, captured the dominant sentiment of generations of fans suddenly plunged into mourning. Again and again they claimed: He changed my life. . . He taught me how to be myself. . . David was my inspiration. . . David was my tutor. And most could quote their own favourite song lyric expressing their faith: Oh no, love – you’re not alone. . . Don’t tell them to grow up and out of it. . . It’s only for ever, not long at all. . . All you’ve got to do is win. . . We can be heroes just for one day. 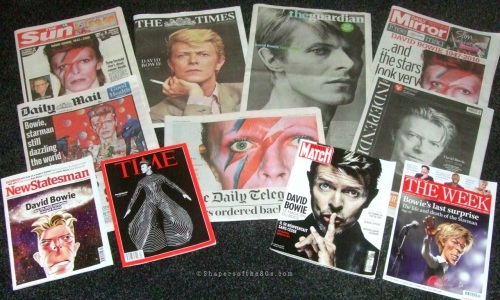 One response to “➤ “I’m not a rock star” Bowie often said – No, David, you were a messiah”