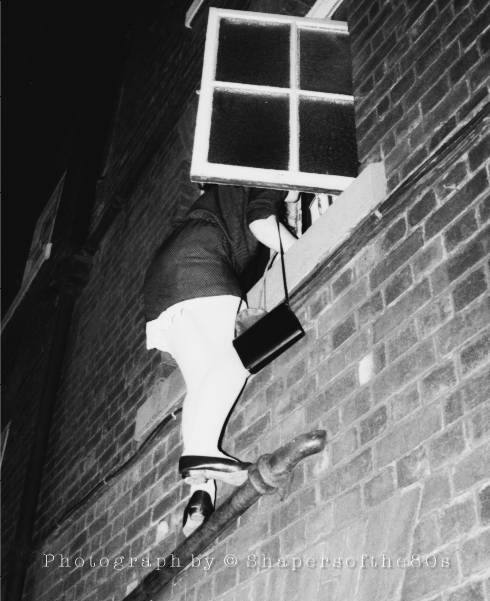 IS THIS YOU? May 8, 1982: A teenage fan shins the drainpipe at the Liverpool Empire giving access to Spandau Ballet’s dressing room on their first nationwide tour with the Diamond album. Snapped by © Shapersofthe80s

❚ WERE YOU A FAN of Spandau Ballet in the 1980s? Here’s an appeal for your experiences from a reputable documentary film-maker…

“ We are looking to speak to people who lived through the early years of the band’s success in the 80s for a BBC 4 documentary on the history of music and fashion in post-war Britain.

We are particularly interested in hearing from people who took fashion inspiration from them and the New Romantics scene and may still have some clothing from that period. If you can identify with this and wouldn’t mind speaking to a member of the team about your experiences please contact Lucy Joyner: ljoyner [ a t ] oxfordscientificfilms.tv ” 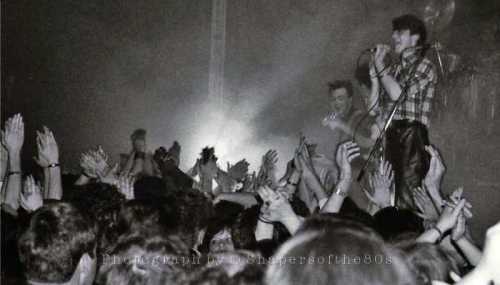 Unrivalled adulation in the early 80s: Tony Hadley faces the audience during Spandau Ballet’s Diamond tour of 1982. Photograph by © Shapersofthe80s

DID YOU WITNESS POP HISTORY IN THE MAKING?

❏ Who are the two Liverpool music fans so keen to meet their idols that they shinned the drainpipe at the Empire theatre leading to the dressing room of Spandau Ballet, Britain’s premier New Romantic band of the 80s? After knocking on the window, the girls achieved their goal when bass player Martin Kemp helped them to safety inside.

The year was 1982. Spandau’s seventh single Instinction had put them on Top of the Pops during Easter week and sales were rocketing. The night of May 8, towards the end of Spandau’s first nationwide tour, with stand-up comedian Peter Capaldi in support, has become known as The Return of the Scream. The moment the house lights dimmed, a mighty roar lifted the roof off the Empire, the city’s legendary music venue. It didn’t stop for 75 minutes. The band hadn’t heard anything so intense and were visibly shaken when they came offstage. Guitarist Gary Kemp said in disbelief: “I had to stop playing. I couldn’t hear my own monitor.”

What we had all witnessed was the return of the true teenybop scream, the continuous bellow from the lungs, little heard since the days of the Beatles. Security men and women were clearly caught out by the pandemonium as they wrestled to persuade the screamers back to their seats. One Empire veteran said that night he’d heard nothing like it since the Bay City Rollers in the mid-1970s.

A crowd of at least 500 fans surrounded the stage door afterwards and a shadow had only to fall across a dressing-room window for the scream to start again in the street. Two girls then decided to shin the drainpipe and beat the second-storey window with their handbags until they were let in.

Police with batons eventually arrived and the band managed to escape through the front doors of the theatre, but only after two decoy departures had been staged. Even so, in the murderous dash through the crowd packing the pavement, saxophonist Steve Norman lost a bracelet and singer Tony Hadley a chunk of his scalp. As their coach pulled away, I was stranded on the kerb photographing the mayhem.

Inside the Liverpool Empire, May 8, 1982: fans shocked security staff with the roar that greeted Spandau Ballet. Photograph by © Shapersofthe80s