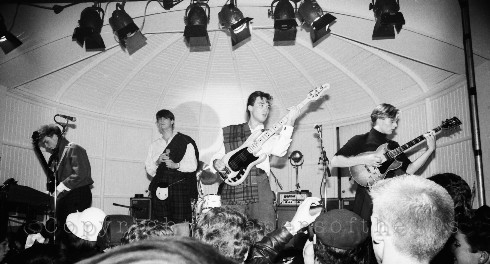 Kilted leaders of the New Romantics in 1980: Spandau Ballet plus their entourage of Blitz Kids travelled to Birmingham’s Botanic Gardens to play their eighth live date. (Photograph by Shapersofthe80s)

❚ WITH A TITLE AS ZEALOUS AS any of their New Romantic songs from 1980, Soul Boys of the Western World is the documentary movie about the time Spandau Ballet became the musical leaders of London’s underground clubland. For two years they were the trendiest creatures on the planet as they reshaped British music and fashion, believe it. The 102-minute biopic is to be premiered on March 12 in the 24 Beats Section of the prestige new-media conference SXSW in Austin, Texas, running March 7–16. To complete the first reunion of the whole band since their 2010 tour ended, singer Tony Hadley will be flying out to join Gary, Martin, John and Steve at the screening.

Fans who imagine they can gate-crash, however, will be seriously stymied by the price of registration for the film programme which increases to $650 the later you book. Before travelling to Austin, Spandau fans are advised to ensure they have secured a ticket. Hints from the Spandau team suggest there may be more news soon.

The film contains no present-day pontificating from the band’s famously garrulous entourage of talking heads, only through vintage film footage telling their story as it unfolds. Steve Dagger, Spandau’s manager and its sixth member since the band was created and now the film’s co-producer, is impressed and excited by the extensive research which has been fanatically pursued for the past three years. Initiated by archive producer Kate Griffith, this has turned up many true gems of previously unseen footage even of the landmark “First Blitz invasion of America” with the Axiom fashion collective in 1981 which was located in only the past three months. Offcuts from footage of the band’s followers shot in Le Kilt club for BBC Newsnight were also discovered in a box that remained unopened for 30 years. There are also clips from the band’s home movies.

Songwriter Gary Kemp is over the moon at the painstaking finesse of the production led by Scott Millaney, one of the iconic producers of 80s pop videos. Kemp said last week: “People should be really knocked out by some of the material we’ve discovered.”

Director George Hencken aims to takes audiences through the cultural, political and personal landscapes of Britain as the Swinging 80s burst from the recessionary gloom of the 70s. Soul Boys Of The Western World explores life inside the bubble of global superstardom when British pop music ruled the world. Spandau Ballet themselves believe the film to be “a brutally honest story of how friendships can be won, lost and ultimately regained”.

Nomad warriors on the streets of north London, 1981: Spandau Ballet dressed for their Musclebound video. Martin Kemp called his the Mad Monk outfit. (Promotional pic for the documentary film, Soul Boys of the Western World)