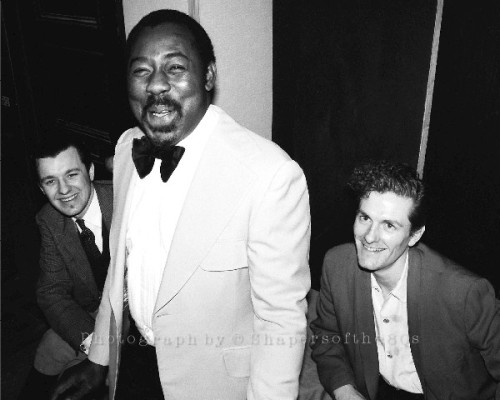 The Wag, for 19 years the coolest nightspot in Soho: its suave doorman Winston is flanked by co-hosts Chris Sullivan and Ollie O’Donnell. © Shapersofthe80s

➢ The July issue of High Life magazine celebrates the launch next week of the Club to Catwalk exhibition in the V&A fashion gallery – Longtime Wag club host Chris Sullivan recalls the unbridled creativity, outrageous abandon and downright cheek of London in the 80s …

“ It was 27 April 1985 and the opening party for the second floor of the Wag Club – the nightspot I founded and ran in Soho – was in full, unrestrained swing. Fuelled by the unlimited free bar, the place was totally off the hook, the crowd dressed to the nines in their own inimitable fashion – pirates, preachers, punks and picture-postcard peaches – throwing themselves about with Bacchanalian abandon to a soundtrack as arcane and varied as they were.

“ High jinks indeed, yet looking around I realised that we as a group had come of age, were taken seriously and that this moment was ours. George Michael danced next to Siobhan of Bananarama overlooking Sade who nodded to the music in front of Suggs and Martin Kemp. Over the way, John Galliano camped it up alongside Leigh Bowery, Judy Blame, Boy George and one of the scene’s most innovative dressers and designers, Stephen Linard, while behind them stood Steve Strange and Princess Julia chatting to Vivienne Westwood… ” / Continued at High Life

➢ Club to Catwalk: London Fashion in the 1980s runs at the Victoria & Albert Museum, July 10–Feb 16, 2014. Featuring more than 85 outfits, it showcases new looks from the decade’s most experimental designers and some remarkable photography from back in the day