❚ AND YOU WON’T STOP READING THEM! A novelist asked David Bowie to explain his comeback album. In his own way, Bowie uttered his first public words on the subject: 42 of them.

“Never has an album been quite as resistant to interpretation as The Next Day,” writes Rick Moody, the 51-year-old American author, tipped by New Yorker magazine as one of its “20 writers for the 21st century”. So he asked Bowie for some clues! We offer a few teasers here to entice you in, but no spoilers. The original piece is so rewarding, you won’t regret setting aside half an hour of your time to devour it… Moody talks of cocktail napkins, albatrosses, a sequence of ghosts and the pressure to be à la mode … of chanson, of papal indulgences, of hatred of rhyme, the ancient temple in Rome, quintessential Britishness, rethinking certainties and the world at war…

SHAPERS OF THE 80S OFFERS AN EXTRACT
FROM HIS MONUMENTAL ANALYSIS

➢ Rick Moody dissects Bowie’s new album with the help of its creator in 14,000 words published yesterday. Read the full essay at the pop-cultural web platform, The Rumpus

BY RICK MOODY: “ I am writing these lines because The Next Day, the album by David Bowie, is the unlikeliest masterpiece of the recent popular song, the best album by an otherwise retired classic rock artist in many, many years. It kicks the shit out of that recent spate of albums by Neil Young and Crazy Horse, it is better than anything the Stones did since Tattoo You … [etc etc etc]

“ It’s a remarkable and completely unpredictable masterpiece by a guy in his later sixties, an album that doesn’t sound like anything else happening in 2013, except that it sounds, in some ways, like a lot of the very best work David Bowie has done … [etc etc etc]

“ In the environment of Taylor Swift and Justin Bieber and One Direction, David Bowie sounds like a titan, like a behemoth of song, but it’s not only because of his context, it’s because he made a great album, which has more passion in each composition than most people manage in entire albums … [etc etc etc]

“ I wanted to understand the lexicon of The Next Day, and so I simply asked if he would provide this list of words about his album… and yet astonishingly the list appeared, and it appeared without further comment, which is really excellent, and exactly in the spirit of this album, and the list is far better than I could ever have hoped. ” 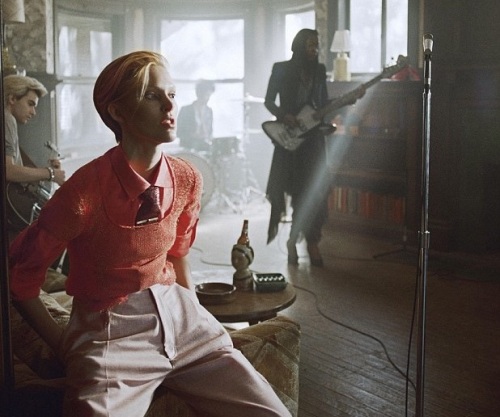 Having asked Where Are We Now? in his first comeback single this year, Bowie’s second posed other enticing questions in a sexually ambiguous video for The Stars (Are Out Tonight) (ISO Records)

“ It’s a great list, and it has the word chthonic on it, and this is one of my very favorite words, and you have to admit, additionally, chthonic is a great word, and all art that is chthonic is excellent art, and art that has nothing chthonic about it, like, let’s say, ‘Don’t Worry, Be Happy’, that is art that’s hard to withstand ” …
➢ Rick Moody continues at The Rumpus

+++
❏ Rick Moody: “ They have no idea how easy it would be to stop. Still, this neglects the loss you would feel about retirement… Ian Hunter, the British singer-songwriter and Bowie’s acquaintance for whom he once wrote All the Young Dudes, had a song on this subject, on his comeback album called Rant (2001), the song being Dead Man Walking (What am I supposed to do now?/ Crawl down the hole of monotony?/ The silence is deafening/ The phone never rings) ”

This entry was posted in Pop music, Social trends, Youth culture and tagged Britishness, David Bowie, Ian Hunter, Reviews, Rick Moody, The Next Day, The Rumpus, Video, Where Are We Now?. Bookmark the permalink.