➤ The Bowiesconti proxy has spoken: only second-hand interviews from here to eternity 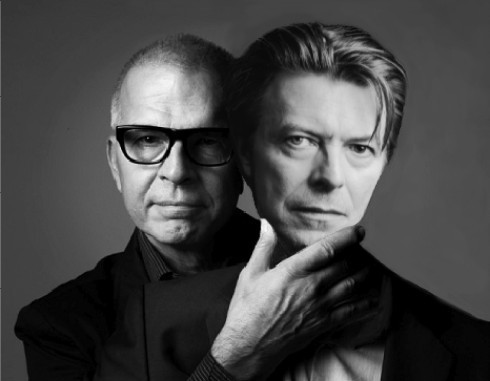 The Bowiesconti proxy: silent pop star plays puppet in the hands of his ventriloquist producer Visconti

❚ SHOCK HORROR REVELATION in today’s Times. David Bowie has been a member of Alcoholics Anonymous though seems to have abstained from drink 23 years ago. This is the bonus ball among many truths we’ve been getting closer to since the star’s 66th birthday comeback bombshell on Tuesday. Another is that he will “never do another interview again” and this itself comes from the mouth of his lifelong 68-year-old friend and producer Tony Visconti who is giving this interview to The Times. Visconti has become Bowie’s Voice on Earth, we’re told. And by the end of the two-page read, we’re so far into Smash Hits territory – Bowie’s fave TV shows are The Office and The Shield – that you’re gritting your teeth at the prospect of another 30 years of interview-by-proxy.

➢ Meanwhile here are five revelations we gleaned from today’s Times interview with the Bowiesconti proxy:

1 – A second Bowie single may be issued before the album The Next Day is released on March 11. And a second album is almost inevitable. “What he wants to do is make records. He does not want to tour,” says his Voice on Earth.

2 – An exclusive list of the 14 album tracks shows all-original material embracing adult themes of “tyrants, spies and soldiers” to reflect Bowie’s recent reading matter, as well as “love in the internet age”. Titles include Dirty Boys (about glam-rockers), Valentine’s Day (about a mass murderer), Set the World on Fire (about an unnamed female nightclub singer) while the track The Next Day is itself a gruesome number in which a man is hung, drawn and quartered in stereo (remember the final scene in Braveheart?) so you might have to look away now and have a lie-down.

HDQ in Braveheart 1995: Mel Gibson takes it like a man

3 – During Bowie’s cocaine-fuelled Berlin years recalled on the new single, Where Are We Now?, his Voice says: “We’d have both been dead if we’d carried on.” Visconti stopped taking coke in 1984. Both men went to AA and we’re invited to deduce that Bowie has passed his 23rd anniversary without a drink, placing his temperance decision at 1989, year of the Tin Machine album, itself an expression of musical regeneration.

4 – Since his heart op in 2004 rumours have circulated that Bowie also has cancer. “They’re categorically not true,” says the Voice. “He is incredibly fit because he takes care of himself. He looks rosy cheeked.”

5 – Big letdown for the gayers: while living in Berlin David and Iggy had separate bedrooms in their seven-room Hauptstrasse apartment. Did their relationship go beyond friendship? “No, absolutely not.” Aw, c’mon. What about the Ziggy years? “I never witnessed him with a boyfriend,” Bowiesconti declares. “He said Ziggy stardust was a persona.”

After slapping us with this big wet fish, perhaps Tony Visconti can rehearse a few laughs for his next major interview as the proxy David Bowie, otherwise Jonathan “The Joker” Ross will hog the limelight as usual.

➢ New from the Sunday Telegraph interview with the Voice on Earth:
“ Despite all reports to the contrary, Visconti reveals that Bowie may actually perform these songs live. “He doesn’t want to tour any more. He’s had enough of it. But he hasn’t ruled out that he might do a show.”

Will there be another record? “We recorded 29 titles. We have at least four finished songs that could start the next album,” says Visconti. “If all goes well, we will be back in the studio by the end of the year. He’s back. Bowie has found out what he wants to do: he wants to make records. Nothing else.” ”

➢ Jan 13: David Bowie secures first Official Top 10 Chart single in two decades – Arriving at Number 6, Where Are We Now? becomes his highest charting hit since Absolute Beginners reached Number 2 in 1986.
➢ Shock and awe verdicts on Bowie’s born-again masterpiece
➢ Riddle of the train Bowie could not have taken in
Where Are We Now?

This entry was posted in Culture, London, Media, North America, Pop music and tagged David Bowie, Iggy Pop, Interview, Next Day, Tony Visconti, Where Are We Now?. Bookmark the permalink.

One response to “➤ The Bowiesconti proxy has spoken: only second-hand interviews from here to eternity”