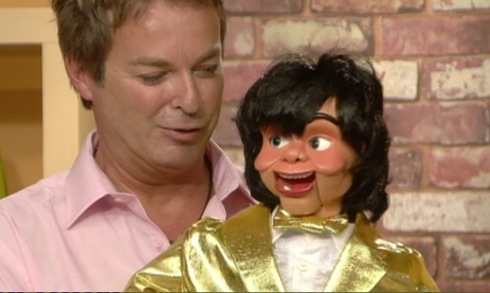 ❚ FORGET THE EVICTIONS! The question every British man is asking tonight after the first public vote ousted Prince Lorenzo from the Celebrity Big Brother house is: Where can I buy one of those sensational Vegas-style gold lamé tuxedos? Oh yes. And matching must-have bow-tie. Check.

Halfway through a Big Brother task tonight we saw comedian Julian Clary operating a cheeky-chappie ventriloquist’s dummy which he had christened Lorenzo, after his princely housemate, and putting some very apposite words into his mouth: “I am a prince and I’m not gay, do you hear me?”

But as well as the viciously glossed black pedigree hair on the polyurethane “Lorenzo”, the real show-stealers were his immaculately tailored gold jacket and dazzling tie. It’s pretty obvious that Channel 5 phones must have been ringing with international jetsetters wanting to know which fashion-forward couturier could supply them with similar bespoke evening wear. Could the designer be Tom Ford, Dries Van Noten, Thom Browne, Hedi Slimane, Marc Jacobs, Raf Simons or Isaac Mizrahi? Our lips are sealed.

Examples from the Kallini range: each puppet comes with either ready-to-wear or a bespoke tailored outfit

The cheeky-chappie comes from an extensive range at Britain’s leading maker of traditional ventriloquist’s dummies which include Grumpy Old Man, Soldier, Scotsman, Schoolgirl, Scout as well as Marvin the Monkey, among other animals. All are hand made in the Tyne and Wear workshop of Kallini Puppets. The dummy heads are first sculpted in clay, moulded in silicone and cast in a strong but lightweight polyurethane resin. It’s no coincidence that the whole range of puppets which come in three sizes — 15-inch, 26-inch and 34-inch — are sold complete with “a costume of your choice” (except for Marvin, naturally). And an outfit bedizened to suit the personality of each dummy is a major selling point.

Could a clue to the gifted designer’s identity be found in the range of puppets themselves? Study the photographs below: one is the Kallini puppet marketed as “Traditional Style Schoolgirl Ventriloquist Dummy” (note the studiously knotted school tie). The other shows a well-known British fashion designer, whom we are unable to name. Yet the coincidence of looks and couture choices provides convincing evidence of a link between the pair.