➤ 40 years of Ziggy + another feast of Bowie

✱ Who needs reminding it’s 40 years since “I picked on you-oo-oo”? June 6 1972 saw the release of one of the most influential albums ever recorded — David Bowie’s The Rise and Fall of Ziggy Stardust and The Spiders from Mars

✱ 9:00 BST David Bowie and The Story of Ziggy Stardust — exhilaratingly observant new TV doc narrated by Jarvis Cocker, 2012, directed by James Hale and exec-produced by Paul Bullock who brought us the brilliant Prince, A Purple Reign last year. Tight, total and definitive (in everything but an Angie contribution), it has contemporary rivals queueing to heap on the respect while nailing the genius with several gasp-out-loud revelations (you will sit up when Mike Garson hits the piano!). Quote of the era: “I can’t stand the premise of going on in jeans and being real.” A landmark. Repeated June 23, 25 and on iPlayer

✱ 10:00 The Genius of David Bowie — energised compilation of best archive performances, 2012, with breathtaking mature renderings of Heroes, Ashes and Fashion, plus magnificent Lou Reed and Iggy Pop as guests among others you’d rather ignore. Also June 23, 25

✱ 11:00 Ziggy Stardust & the Spiders from Mars — D A Pennebaker’s plodding, murky and utterly amateur film might as well have been bootlegged going by its appalling camerawork, shoddy editing, fudge sound (relieved only by its backstage footage revealing Bowie as the angst-ridden artiste). It was shot live at Hammersmith Odeon in 1973, the night Ziggy made his last stand even with Mick Ronson at peak power. “The first we knew we were unemployed was onstage,” the drummer Woody admitted at the Ziggy plaque unveiling in March. Historical curio worth a first watch just so you can feel the heat of real fan worship. If only the evident genius of Bowie himself could have been more watchably captured! But luckily I saw the whole wowie spectacle from Row C and the Standard was the first paper to break the news next morning. (This was the world pre-Twitter, remember.)

✱ Where to draw a line between glitter and glam
— at Shapersofthe80s 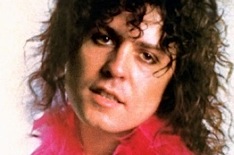 ✱ TONIGHT — Another brilliant radio doc on The Birth of Glam presented by Gary Kemp goes out June 13 at 10pm BST on Radio 2 … Two years ago under its original title The Glory of Glam it prompted a major assessment of the difference between glitter and glam here at Shapersofthe80s. At that time we said “If this documentary doesn’t win a Sony radio award, there’s no justice.”