➢ 1,000 boats will muster on the River Thames — in case you hadn’t heard — on Sunday June 3, to accompany Her Majesty The Queen in the Thames Diamond Jubilee Pageant. The flotilla itself will be over seven miles long and will pass 25 miles of Thames river bank and under 14 bridges. It will take 90 minutes to pass any given point. A global TV audience is expected to number hundreds of millions… / continued online 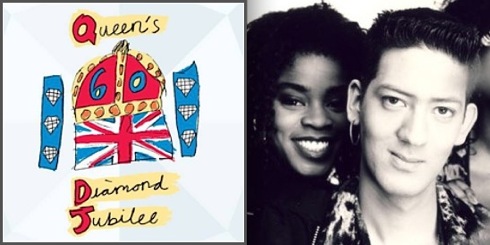 “ According to Adrian Evans, the “pageant master” tasked with arranging a London Philharmonic Orchestra soundtrack for the Jubilee flotilla’s voyage down the river Thames, the Kinks’ Waterloo Sunset didn’t quite make the cut. Come June 3, the 86-year-old monarch will instead be serenaded with movie themes and century-old chestnuts. Today, though, The Guardian offers its own fantasy flotilla playlist of 14 tracks which start from Albert Bridge with The Clash’s London Calling — 1979. (London is drowning and I live by the river. The video for this Thameside apocalypse was shot beside the bridge)…

It nods to Southwark Bridge with S’Express: Theme from S’Express — 1988. (Shoom, in nearby Southwark Street, was ground zero for British acid house. Supercool DJ Mark Moore is suitably lowkey today on Facebook, “Most amusing”, and reminds us he was frontman in the 80s act)…

And reaches Tower Bridge with Blur’s This is a Low — 1994. (The flotilla turns around here, but the song follows the river eastwards. And into the sea/ Goes pretty England and me)… ” / continued at Guardian online

➢ An iPad app creates a multimedia journey in time-lapse videos shadowing the Thames Diamond Jubilee Pageant in which the London Philharmonic Orchestra will perform popular works by great British and Commonwealth composers on the glass-fronted herald music barge, Symphony.