➤ OMG! George and Fadi trigger what the Telegraph calls a “marmalade-dropper” over breakfast 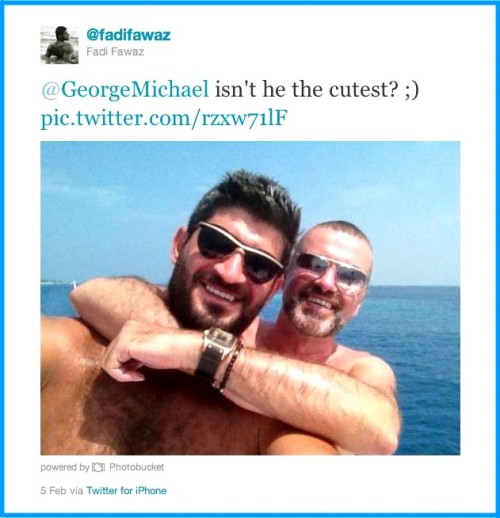 ❚ THIS TIME THE DAILY MAIL got there first, shock, outrage! Pop singer George Michael’s boyfriend Fadi Fawaz posted a picture yesterday via Twitter of the pair cuddled up on a sunshine holiday, with the caption, “Isn’t he the cutest?” Minutes later George responded with a second snap saying “Yes he is :)”

The star then tweeted to say: “Oh and by the way everyone, if u are wondering why Fadi is the one sending you the pics lately, it’s cos I jumped in the decking pool with my iPhone in my shorts pocket yesterday.”

If we scroll further back in the boyz’ Twitter accounts we’d have seen several holiday snaps in recent days. With one pin-up of his favourite chunk of beefcake, who is a leading hair and beauty stylist in London, 48-year-old George tweeted the comment: “Sun, sand, and a bit of this doesn’t hurt either.” Earlier, George posts another pic of the carefree couple, saying: “This is an oldie from Venice, we clearly have no idea the paps were there, I look way too happy.”

George replies with a second snap: hunky boyfie to the fore

The boyz are yachting and jet-skiing at an undisclosed location George reveals is in the “southern hemisphere” and is a “bit classier than Club Trop, and the drinks are far from free”. It is, he adds, his first real holiday in many years, and “I might remind the media that my ‘new man’ is in fact the same man they photographed me with at Nobu… in 2008!”

The Mail report reminds us that the 80s superstar is continuing his recovery after narrowly escaping death only weeks ago during a serious bout of pneumonia. George’s tweets confirm this: “Even my tracheotomy scar is healing nicely in the sun — was looking a bit Bride of Chucky for a while.”

He also announced: “People, I’m excited… just finishing a ballad that I think is going to make you think my eighties self has been re-born, which I suppose it has in a way.” As for resuming the tour that was cancelled because of his illness, he told one fan: “Realistically I can’t see my vocal cords being being ready till the summer.”

Dear Sir! Daily Mail readers are, as we know, unshockable. Comments beneath the romantic pictures posted online include:
❏ “Go get a room gm. Spare us please” — the Lady, who prefers dogs to SOME people
❏ “Old man with a toyboy. YUK!!” — Alan, Sussex
❏ “George has finally found the love of his life… A guy who looks like himself.” — Realist, Coventry
❏ “I have always thought that George Michael & Sir Elton John would have made a lovely, great couple. Both excellent musicians, in their own niche. Both lovers of children & animals. Good luck to them all.” — Pamela Hutton, Sydney, Australia.

AND NOW FOR SOME MUSIC: GEORGE’S LATEST SINGLE HE WAS PROUDLY TWEETING ABOUT

❏ Fadi tweets “My fav song of Fairouz” — Music facts: Nouhad Wadi Haddad, also known as Fairuz/Fairouz which means “Turquoise”, is a 76-year-old Lebanese artist widely considered to be the most famous living singer in the Arab world.

❏ Dec 23: “This has been the worst month of my life.” George Michael gives an emotional and breathless press conference admitting his  life has been hanging in the balance as he battled pneumonia in Austria. Unbelievable American newspaper headline immediately before his recovery: Radicals Condemned for Praying for George Michael to Die

❏ Dec 13: A couple of weeks earlier George had been bearing up by compiling a playlist of his all-time favourite Christmas songs, top of which was his own December Song (I Dreamed of Christmas), “Written with my best friend, David Austin”.

THAT VOICE, ONLY ONE MONTH BEFORE THAT

This entry was posted in Pop music and tagged Every Other Lover, Fadi Fawaz, Fairuz, George Michael, holidays, photography, Twitter. Bookmark the permalink.