British artist David Hockney posing yesterday at the Royal Academy of Arts in London with his painting The Arrival of Spring in Woldgate, East Yorkshire in 2011. Photograph by Luke MacGregor, Reuters

“ The Royal Academy of Arts in London has never been host to an exhibition quite like David Hockney’s A Bigger Picture. The academy has a history dating to 1768. The one-man show, which runs from Jan 21 to April 9, is a tour de force. It consists almost entirely of new work, using both low-tech media such as painting and the latest high-tech tools. Hockney approaches the time-honored subject of nature in a fresh, contemporary way. The result is spectacular.

Hockney has also come up with a more hi-tech kind of picture created by multiple, high-definition cameras set at slightly different angles. The result is a moving photo-collage: a bigger picture because it sees more, from varying points of view. Most of the films on show are landscapes, though the most recent is a dance spectacular, shot on 18 cameras in Hockney’s studio. It gives a wonderful festive finale to the exhibition, in which Hockney paints the stage in sumptuous color, and shoots the action like a combination of Pablo Picasso and Busby Berkeley ” … / continued online

“ [Hockney] is commanding new technologies in a countercultural quest to prove that painting, in an age dominated by conceptualism and installation, can be as theatrical and monumental as any 21st-century spectacle. ” 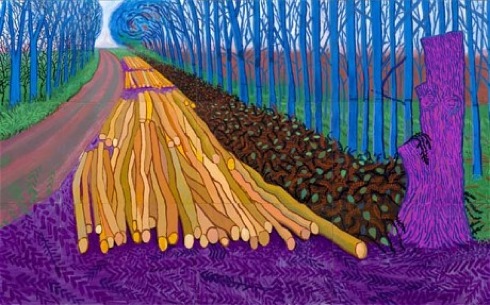 ➢ Whatever game David Hockney is playing eludes me,
says Alastair Sooke in The Daily Telegraph

“ Hockney is best known as the raunchy Californian sensualist who painted sun-kissed boys gliding through the azure swimming pools of Los Angeles in the Sixties. And yet here he presents himself as a modest pastoralist, content to hymn the bounty of nature with quiet exultation – dancing, like Wordsworth, among the daffodils. Once inspired by distant destinations such as Egypt, China and America’s West Coast, he now seems happy pottering about a neglected nook of England. The prodigal son has returned to within 65 miles of Bradford, where he was born in 1937, and settled down. The internationalist has turned parochial. The radical has come over all conservative … Perhaps it’s a generational thing, but I don’t understand paintings like these. Fresh, bright and perfectly delightful, they are much too polite and unthinkingly happy for my taste: if they offer a vision of arcadia, it is a mindless one… ” / continued online

Hockney at his London studio, July 3, 1983: after a pause of two years, new canvases indicate the urgency with which he has resumed painting. Photographed © by Shapersofthe80s

❚ WHILE IN LONDON FOR A FORTNIGHT in 1983 David Hockney says that he has resumed painting after a two-year break pursuing photography. The freshly primed canvases in his London studio testify to the urgency with which he wants “to deal with the ideas that are bubbling away”. He lobs in a shocker: “I’ve looked at some cubist paintings for 25 years without understanding them. Suddenly I see cubism differently, more clearly. And my experiments have led me to a couple of theories of my own . . .”

➢ Only at Shapersofthe80s, exclusive photographs and long, fascinating interview from 1983 at the time of his
London show, New Work With A Camera