“ BRYAN FERRY WAS WATCHED PROUDLY by his four sons as he was honoured with a CBE at Buckingham Palace today. But some could be forgiven for wondering if the Queen knew about some of the Ferry boys’ past bad behaviour as they joined their father during his investiture ceremony.
While the four brothers — Merlin, 20, Isaac, 27, Otis, 29 and Tara, 21 — looked undoubtedly smart in their suits, three of them are no strangers to controversy, with one receiving a conviction for drink driving… ” / continued online

Ferry in Mail video: “ The Queen said, Music is important.
I said, I couldn’t agree more ”

➢ Does the miner’s son feel at home in the elite circles in which he moves? — Telegraph interview by Neil McCormick 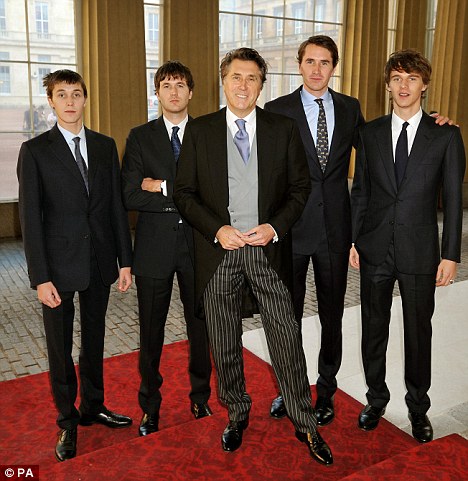 Ready to meet the Queen: Bryan Ferry is joined by his sons (L-R) Merlin, Isaac, Otis and Tara at Buckingham Palace (PA)