➤ Tut-tut, Your Maj, that Aussie tram ride was a missed music video opportunity 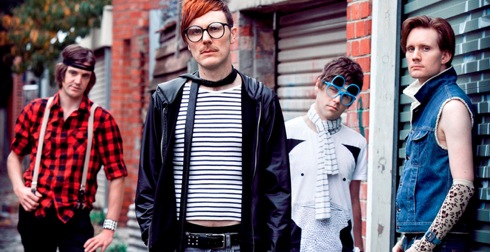 The Bedroom Philosopher’s new band: all aboard the 86 tram to hear their record deal announced by cell-phone

➢ CLICK ON THE PIC to run the music video Northcote, by the Bedroom Philosopher, shot on board the 86 tram

❚ MELBOURNE’S DEEPLY GEEKY Bedroom Philosopher, noted for his ode to absurdity, I’m So Post Modern, famously rode the No 86 tram last year in the video (above) for his cross-over hit single Northcote (So Hungover). Why? Melbourne boasts the world’s largest tramway system (249 km) and within that, Route 86 is not only the busiest but universally regarded as THE hippest in the universe. Because it connects RMIT University campus to Waterfront City, it carries All Human Life.

The Bedroom Philosopher has graduated from broadcasting with JJJ’s Morning Show to the crucial role blogging as one of Australia’s spokesmen for confused youth. His third studio album, Songs From The 86 Tram, recorded with his dynamic backing band The Awkwardstra, was nominated for an ARIA award. The album drew on the multi-award winning show of the same name (Directors Choice, Melbourne International Comedy Festival 2009), which showcased the BP’s “astonishing range as an impersonator of suburban characters with depth and empathy, all backed with lively, genre-hopping soundtracks – think Chris Lilley meets Beck” (his own words). 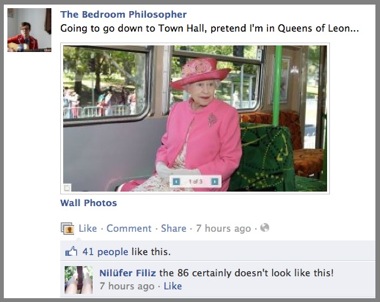 The video for its single Northcote is directed by Craig Melville (Chaser, John Safran) and featuring cameos by rock royalty Tim Rogers, Kram and Angie Hart. It has won more awards than we have time to count.

And yet the Lord Mayor still put Her Majesty QE2 on the wrong tram during her 16th state visit to Australia this week. The video below, specially commissioned by Shapersofthe80s, seeks to redress this diplomatic howler.

TBH, DOESN’T QUITE WORK DOES IT?