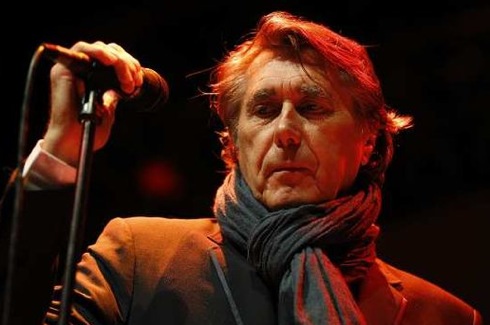 ❚ OUR MAN IN WEST HOLLYWOOD papped Bryan Ferry today snacking at the coolest pizzeria in town, Mozza on North Highland Ave (below). Last week of course he ended his first American tour in nearly a decade — with members of Duran Duran and Blondie in the Los Angeles audience on Saturday. The Olympia tour arrives in London with two gigs at the Shepherds Bush Empire on Dec 14–15.

➢ Craig Rosen reviews his closing US concert for SoundSpike …

“ Ferry’s show at the Greek Theatre in Los Angeles did more to promote the notion that he could be today’s greatest interpreter of songs from the rock era. That’s because the veteran crooner performed only two tracks from his album Olympia, instead devoting much of his set to performing songs made famous by other performers. That shouldn’t have come as too much of a shock, given that Ferry’s 2007 release was Dylanesque, an album full of Bob Dylan covers. Sure enough, Ferry wheeled out three songs penned by his Bobness — Just Like Tom Thumb’s Blues and Make You Feel My Love fairly early in the set, and a show-closing take of All Along the Watchtower.

“ In between, we got a blistering rendition of Neil Young’s Like a Hurricane, which closed the first set, a few soul nuggets — Wilbert Harrison’s Let’s Stick Together, Sam & Dave’s Hold On, I’m Comin’, an extremely sympathetic reading of John Lennon’s Jealous Guy, and a smoldering take of Screamin’ Jay Hawkins’ I Put a Spell on You… Saturday night, he proved to be the Frank Sinatra of the rock era. Instead of merely offering a carbon copy of the originals, when Ferry covers a song, he truly makes it his own. ” / continued online

➢ This week the Vinyl Factory released two remixes of the Olympia tracks Alphaville and Me Oh My in limited editions of 500 copies on heavyweight 180-gram vinyl, price £10.

➢ Fan-moist interview with Ferry, “the sultan of suave”, at The Quietus