➤ Steve Strange puts on an Essex face for Ascot 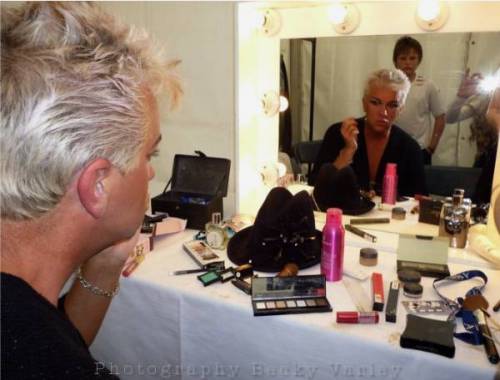 Steve Strange before: master face-painter at work at Ascot... Photography by Becky Varley

❚ OLD ROMANTIC HABITS DIE HARD. Steve Strange finally got himself onto a stage this weekend singing the odd Visage hit, following the horse-racing at Ascot in Berkshire for this summer’s last Here & Now 80s revival line-up. But beforehand, the veteran poser and onetime greeter at the Swinging 80s Blitz club had to plaster over the cracks with a touch of Polyfilla — he’s just celebrated his 52nd birthday after all. Then, naturally, he couldn’t resist applying slightly more bronzer than an Essex girl would need for a night out clubbing down the Chigwell Road. The after snap is a minor miracle that should convince the doubters Steve hasn’t lost his knack for maquillage, whatever the voice sounded like (audience reports eagerly awaited). Supporting Steve during his comeback was a galaxy of 80s stars who included Kid Creole, Toyah Willcox, Paul Young and Jimmy Somerville.

Who better than Steve could qualify as the face of a cosmetics firm, according to breaking news at Wales Online? (Remember his origins as Steven John Harrington from Newbridge where he went to school?) WO reports this weekend: “The Visage frontman, famed for wearing garish eye shadow, mascara and blusher alongside the likes of Boy George in the 80s New Romantic movement, is set to front products made by Illamasqua. The firm aptly markets its range as ‘night-time make-up for your alter ego’ and says its distinct style is inspired by members of ‘alternative scenes’.” Bingo!