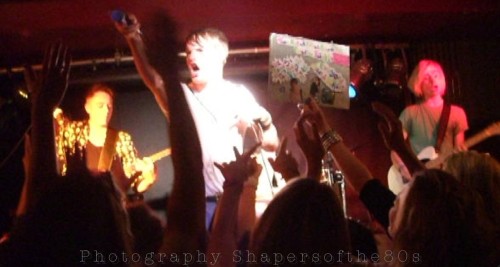 “It takes a minimum of four girls to start The Scream,” said Steve Dagger in the 80s: the old rule of pure-pop was certainly fulfilled at Islington’s sold-out O2Academy when Paradise Point headlined tonight. Cam Jones leads an encore of Run In Circles which basically the girls sang for him — in between screams. Roman Kemp at left, Adam Saunderson right © Shapersofthe80s

◼ THIS WEEK BASSIST ROMAN KEMP told Hemel FM: “We’ve only been around for eight months so we’re amazed by how it’s been going. The other day we were confirmed for the Wireless Festival on Sunday. We were amazed. Playing before Pulp!”

OK, a bit of artistic licence there. The club scene’s dynamic pure-pop teen band Paradise Point are scheduled to strike up at exactly 15:20 in Hyde Park, which is about four hours before Grace Jones goes on, to be followed by Jarvis Cocker’s band Pulp who top the bill at the three-day fest. All the same, Kemp wasn’t exactly overdoing the crowing rights. This gig is a huge coup for a bunch of live 18-year-old popsters without a recording deal. 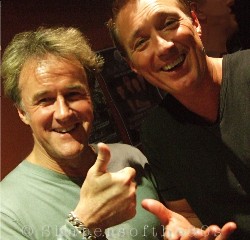 In the audience for Paradise Point at Islington’s O2Academy: Spandau manager Steve Dagger and Martin Kemp vote Roman Kemp’s band a hit. So no surprises there, then.

Call of the Wyld is a blogger who “tracks young, new and exciting bands as they emerge” and last month he wrote: “This lot are sex on legs and even if they weren’t actually any good they would still find it hard to walk on stage without being shrieked at. Fortunately their music is excellent too. These are real pop gems — certainly 80s inflected, but delivered with a whomp and panache that would put a lot of other acts to shame. The Only One is a track that is going to get them a lot of attention.” As a taster or three, view PP’s live debut last November (below), videoed by Shapersofthe80s, scan our first PP concert review and give the Hemel FM interview a spin:/%20