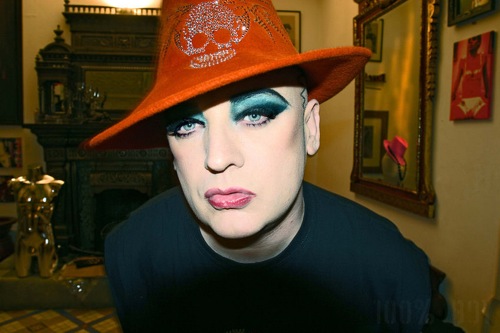 Boy George at home: 50-up but when will he stop pouting?

❚ ON TUESDAY JUNE 14 George O’Dowd celebrates his 50th birthday with a few select friends at the Vauxhall nightspot, The Lightbox. Yesterday an interview in the Daily Mail reunited him with Spencer Bright, the co-writer of his 1995 autobiography Take It Like A Man, which proved more cringingly honest and fuller of nasty settlings of scores than any popstar in their right mind should attempt. For that reason it was — and remains — a compulsively readable milestone in the endurance course that is Boy George’s life.

In recent years, interviews have been marred by self-serving psychobabble and improbable mysticism, but yesterday’s talk with Spencer Bright finds George momentarily on a more even keel. Finally, finally, Spencer elicits an astonishing confession from him: “Now, I can actually say that I do have lots of regrets.” 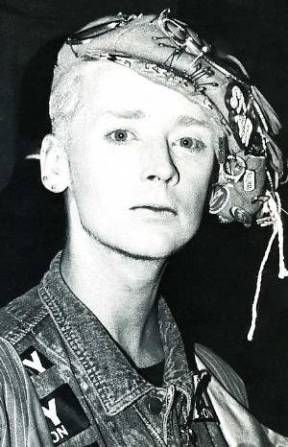 George had always been among the more highly visible of London’s style-setting Blitz Kids. By the mid-80s he had become one of the biggest popstars of the decade and his “blue-eyed reggae” band Culture Club was among Britain’s half-dozen New Romantic supergroups dominating world pop charts during the second British invasion of the US. Culture Club’s first two singles Do You Really Want to Hurt Me? and Karma Chameleon reached No 1 in several countries during 1982–83, and the band won a Grammy Award in 1984.

After four albums, songwriting had made George a millionaire several times over but he had also fallen prey to heavy drugs and at the age of 25 his band dumped him. He began squandering his life away, as outlined in Ex-jailbird George here at Shapersofthe80s, and fully documented at Wikipedia. A much sanitised account of his teen years was broadcast last year as the TV drama Worried About The Boy, after which ex-Blitz Kids gave their verdicts at Shapersofthe80s.

“ At one point it didn’t seem as if Boy George would make it much past his 25th birthday. Yet here he is, about to celebrate his 50th next Tuesday, and the transformation from the boy popstar to man seems astonishing. No one could be more pleased than me. George and I have a long history, from the days when, as a newspaper reporter, I used to follow him on the club and music scenes. In the early 1990s I helped him write his autobiography Take It Like A Man. We’ve been through a lot together. The book took four-and-a-half years, with much shouting and screaming, mostly from him at me, and moments where he’d crack me up so much I could hardly stand up. ”

GEORGE IS DESCRIBED AS A SOUGHT-AFTER DJ, PRODUCER, SONGWRITER AND PERFORMER:

“ People know me recently for lots of drama. For being arrested and going to prison. I’ve got my work cut out to remind them what I actually do. ”

The Mail interview airs various optimistic hopes which, for somebody with George’s track record, are a hostage to fortune. After claiming to have kicked many of his vices, we’re told he gave up smoking cigarettes six weeks ago — but ask any smoker how many times that gets said in a lifetime! “There are hopes of soon working with top producer Mark Ronson on a record with a reunited Culture Club, and an arena world tour next year.” But no mention of how his criminal records will bar entry into a significant number of countries.

“ I’ve never been a bad person and always had quite good morals. I cherish the moderate life now: I don’t want drama or complication. ”

➢ George performs with other 80s stars in the 2011 Here And Now summer tour from June 17. The single Sunshine Into My Life by Funkysober featuring Sharlene Hector, written and produced by Boy George, is out now on his own label, VG Records