❚ UPDATE, MAY 29: Duran Duran now offer a fulsome apology for having to cancel their current UK tour dates — not, as sceptics suspected, because of unsold tickets but because of singer Simon Le Bon’s continuing “laryngeal problems”. Their website today reports: “Following a consultation with both a vocal coach and his team of ENT specialists today, Simon Le Bon has been advised that he needs to continue to rest his voice… Devastated by the news that they will not be able to resume the tour as planned on Tuesday, Simon said ‘We’ve been postponing shows with very little notice, in the hope each day that the improvement would have been significant enough for me to sing again without risking any long-term damage’.”

View John and Nick’s special video apology at YouTube . . . Today too, Roger Taylor blogs on the DD website on the horrible irony of Woody Allen’s famous quotation “If you want make God laugh, tell him about your plans” and he makes the promise: “I know that all the shows are very close to being re-scheduled later in the year.” . . . Read Simon Le Bon’s blog at DD’s website on June 1: “I reckon I got 6 semi-tones wiped off the top of my range and … it’s very difficult not to worry about it.”

❏ Here’s a sparky interview with the band just released by the SXSW festival, recorded in March. With former MTV reporter John Norris in the chair, Nick Rhodes says he still sees Duran as an art-school band and John Taylor reflects on the golden era of MTV. Stills from this interview have been posted at Flickr 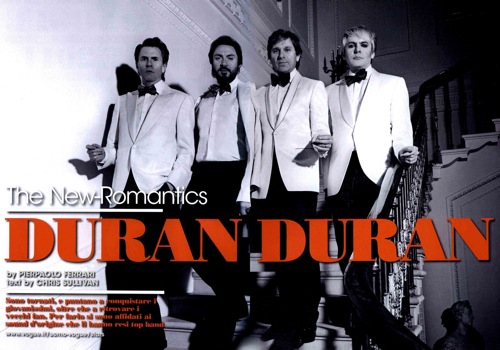 ❏ This stylish tuxedoed shot by Pierpaolo Ferrari comes from the current “Long Live the 80s” issue of L’Uomo Vogue, with a feature on DD by former Wag club host Chris Sullivan, translated for the Italian edition.

❏ It was 30 years in March since the 80s supergroup’s debut single Planet Earth peaked at No 12 in the UK chart… This year their 14-track CD of AYNIN spent five weeks on the UK album chart.

❏ View highlights from Duran Duran’s Unstaged online concert March 23 at the Mayan theatre, Los Angeles, in 1080p HD at the band’s Vevo channel on YouTube /DuranDuranVEVO. Click here to find which global regions are licensed to view highlights at YouTube. The four DD Unstaged concert tracks most viewed via Vevo in the first three weeks after the live webcast drew more than 1.5m views — these are All You Need is Now with 700,930 views, then Notorious 298,505, Planet Earth 290,477, and Friends of Mine 274,935 way out ahead of all other tracks, most of which pulled only four-figure audiences.

❏ Rhodes and Taylor give a 30-minute video interview on Billboard.com including live Q&A (right) on March 30, 2011.

❏ Rhodes and Le Bon give a seven-minute video history of DD for ABC News, Jan 2011 — “Rio was the album that made us the biggest band in the world. It made us big in America”

❏ Duran have been blessed by an interview at Quietus, its holiness the online magazine whose touchstone is “reverence” and claims “we’re not afraid of surprising our readers”. Writer Simon Price delivers two surprises. Plus this list of post-80s albums the band think most deserve to be listened to: The Wedding Album (1993) … Pop Trash (2000) … Medazzaland (1997) … Astronaut (2004).

❏ On the current AYNIN tour Duran Duran played North America and Mexico March 16–April 27, just before their 11-date UK tour from Newcastle to Sheffield May 18–June 4. They take in Berlin on May 26 and continue across Europe, Paris to Bergen June 10–Aug 28. [Update — These were the original plans, which were substantially cancelled in May and June.] In between they return to the UK for the V Festival on both Aug 20 and 21.

♫ View Nick Egan’s Bacofoil video for All You Need Is Now, DD’s comeback single at Yahoo Music — available worldwide on iTunes. A 14-track CD package of the same name was released in March for most of Europe, Australia, Far East and North America with South America following in April.

➢ Elsewhere at Shapersofthe80s — 1980, How Duran Duran’s road to stardom began in the Studio 54 of Birmingham