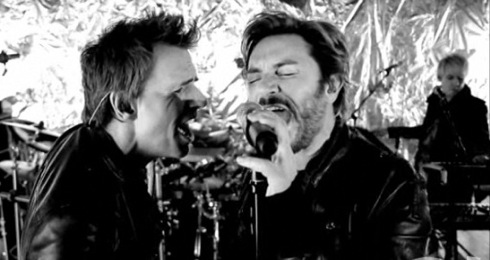 ❚ UNVEILED TODAY: the Nick Egan directed video for All You Need Is Now, the new single by 80s supergroup Duran Duran — which was available worldwide on iTunes from Dec 8. The nine-track digital album of the same name, produced by Mark Ronson is the band’s 13th in a studio. Ronson has called it the “imaginary follow-up to Rio that never was”. An expanded LP with additional original tracks will be released in March 2011 in various formats.

❏ Update AYN debuts at No 6 on Billboard’s Alternative Albums Chart Jan 5. DD will be the featured artist on VH1’s Top 20 Spin on Jan 30.

It’s on the EP From Mediterranea With Love, an iTunes release in Europe, here premiered on the bumbling Mark Ronson’s show at East Village Radio, NYC, when Le Bon and Rhodes had a battle to get a word in edgeways. Whatever his gifts in a recording studio, the music producer is fudge as a broadcaster. Also, it’s not for him to tell us his own production is “amazing”, durr! Ronson, stick to the day job and leave the criticism to the big beasts who can tell a hawk from a handsaw. As it happens, the new tune proves to be classic DD.

❏ Another premiere streamed from East Village Radio — why this new album track is called The Man who Stole a Leopard (feat Kelis) is finally revealed by ITN newscaster Nina Hossein:

No regrets: Nick Rhodes in the AYN video

➢ Nick Rhodes is the man from Duran — Evening Standard interview Dec 9, 2010 … Is Rhodes at all embarrassed by his 18-year-old self? “Not even slightly. When we were teenagers, the world was pretty grey. You want something more exciting — to travel, to see what’s out there.”

This entry was posted in London, Media, Pop music and tagged All You Need, Duran Duran, Interview, Nick Rhodes, Video. Bookmark the permalink.