❚ DURAN DURAN ANNOUNCE THEIR 13th ALBUM, the Mark Ronson-produced, nine-track All You Need Is Now, to be released via iTunes on December 21 and in stores on CD and vinyl in February 2011. Keyboardist and original member Nick Rhodes says: “It’s the best record we’ve made in over two decades.” Fingers must be very tightly crossed in view of their last album attempt. 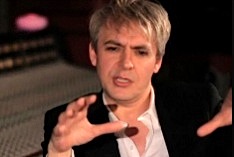 Nick Rhodes: “videos for every track”

True Shapers of the 80s will recall the glory days of Duran Duran — Rio, Girls on Film and Hungry Like the Wolf — when the Brummie New Romantics were one of Britain’s half-dozen supergroups among the MTV generation. Their champagne lifestyle videos such as Rio, shot on 35mm film, set new standards for extended pop promos during the British invasion of American charts — over the years Duran have claimed 21 singles in the Billboard Hot 100.

Rhodes says of the new album: “We will be making videos for every track, which is something we certainly haven’t done since the very beginning.” This week Duran’s Taylors, Roger and John, were pictured in Katharine Hamnett T-shirts (in an echo of her Choose Life message in the 80s) in Roger Dekker’s photo shoot for the album.

“Humpty” Le Bon during the 2008 Massacre

The venture results from a 2008 collaboration in Paris between Mark Ronson and all four original members of DD — John Taylor, Roger Taylor, Nick Rhodes and Simon Le Bon. In Ronson’s words this is the “imaginary follow up to Rio that never was”. The band also promises a spring world tour to promote the album.

Well, they’re going to have to do miles better than the tedious Red Carpet Massacre album a couple of years back which was an utter chart failure. The tour saw a portly Le Bon gallumphing breathless around the stage in his skinny-fit outfit like a trussed-up Humpty-Dumpty, well past it. The obvious lack of chemistry between singer and musicians was an embarrassment all round, sadly recorded for posterity by VH1. Unsurprisingly, Duran’s five-year contract with Epic Records was not renewed in 2009, and they are currently fending for themselves.

Facebook commenters are already calling for Le Bon to shed his current beard. What about some weight too? Even then, the old fella will need a shot of Viagra.

♫ Hear a clip from Duran Duran’s single Being Followed,
which is set for release a week ahead of the new album