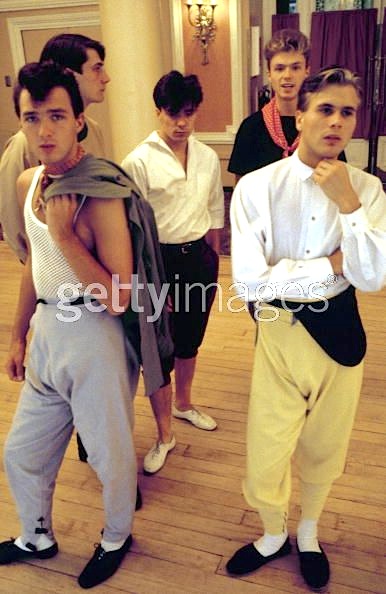 The way they wore: Spandau Ballet minutes before signing their record record deal in October 1980. Photographed at London’s Waldorf Hotel © by Virginia Turbett

◼ AS THE COOLEST CULT LEADERS OF 1980, Spandau Ballet’s songwriter Gary Kemp claimed: “We want the band to be at all times the most contemporary statement we could possibly make on modern London.” In the face of the post-punk new wave, it took courage to decide to play fresh sexy dance music in a corporate landscape dominated by adult-oriented rock supergroups. In the event, the five boys from the Angel, Islington, quickly assumed the role of houseband to the Blitz club and by placing the bass guitar and the bass drum at the front of the sound made it hip once more to play pop.

Spandau Ballet were being managed by their onetime schoolmate Steve Dagger, aged only 23, while three record labels competed to secure them. On this day 30 years ago they signed a deal with Chrysalis Records and walked into the future clutching an advance cheque for £85,000 — at the time, a record sum for an untried band that had played all of eight bookings and had refused to cut demo discs.

“We were strong, it was a real gang, a real team mentality. It was: We’re Spandau Ballet, who the f*** are you?” — John Keeble, Spandau drummer

By breaking all the industry rules, Spandau triggered a fashion and dance music movement that had been evolving in the nightclubs of Britain. At the very moment that the Blitz closed its doors, the press dubbed their followers the New Romantics, and a slipstream of more than 100 new image bands was born. The new sounds and new styles of this, the last of the Babyboomer generation, went on to dominate the international landscape of pop and over the next three years put more British acts in the US Billboard charts than the 1960s ever achieved.

ELSEWHERE ON SHAPERS OF THE 80s

➢ Oct 16, 1980: One week in the private worlds of the new young
➢ Birth of the New Romantics and the band who made it hip to play pop
➢ How the rhythm of the pop charts changed

Tony Hadley fronts The Makers: Spandau as a school band playing to the fourth form at Dame Alice Owens — grabbed from video

➢ VIEW ♫ Early footage of Spandau Ballet in the Young Guns documentary from 2000
➢ New Romantics: I Was There — ex-Sounds hackette Betty Page’s recollections for Record Collector, written with the benefit of hindsight in 2004