Visage Mk 1: Egan, Strange and Ure in 1978 searching for sounds and styles

❚ “I’LL NEVER FORGET FIRST TIME I SAW a synthesiser on Tomorrow’s World. For the first time I saw the possibility to create sounds that had only existed in my head. I’d had no chance of getting my hands on one because they were size of house or at least the cost of one. But then cheaper Japanese synths came on the market, so I bought one. It changed my life because I could make music in a small home studio. The possibilities for young musicians like myself seemed endless.”

This was Midge Ure enthusing during Rocking the Blitz Club (audio at YouTube), another remarkably well-informed BBC Radio 4 documentary on our favourite scene that went out this morning. It was also remarkable for handing over the commentary to Ure, who — despite having earned an OBE for being half the brains behind Band Aid’s smash hit for charity in 1984, and being a founder member of Visage and the voice of Ultravox’s directional chart hit Vienna — is not among the first rank of mythologists programme-makers wheel out to explain the Blitz phenomenon.

This R4 slice of the 80s gave us a refreshingly different take on the familiar fables recycled by the usual suspects, but mediated in this show by Midge’s deeply un-London Lanarkshire lilt. He’s more than qualified to stake his claim to have shaped the music of the Blitz Kids, though he’s reluctant to be described as one of them, being a good four years older, and having had fingers in more pop pies than most on the post-punk scene. Even as the word punk was given the heave-ho in favour of the term “new wave”, Ure was probably the first active player of a synth among any of his clubbing pals, having bought his first, the polyphonic CS-50, at cost direct from Yamaha in the summer of ’78.

His was an obsession shared by fellow Rich Kid, the drummer Rusty Egan, and it led the way to a whole new British dancefloor sound. Ure felt synths “embodied a kind of nostalgia for the future”. 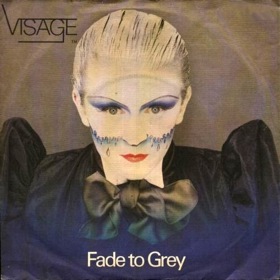 He says: “Rusty and his friend Steve Strange realised our crowd needed somewhere to try out our styles and listen to Euro synth bands like Kraftwerk, Dusseldorf and Telex, whose cutting edge sounds seemed to represent the future.” In almost no time the tribal forces of fashion had granted their wish. Rusty’s deejaying at Billy’s in Soho was augmented by Strange vetting the door to ensure an extreme clubbing attitude, then as 1979 dawned their band of outlandishly dressed clubbing heroes descended on the Blitz.

In his straight-from-the-hip autobiography, If I Was, Midge Ure makes the bold claim: “I had this idea to make music to play in the club. We had to invent our own musical style because our points of reference were very limited — after Kraftwerk, Yello and early Bowie we ran out of influences.” His own taste was for the very textured sounds of the synth built round classic songs, which intuitively caught a mood, unarticulated at that time, for a return to melody. And yet …

“A synth is just a software program and it has a very specific sound — a cold European soulless sound that drummers couldn’t emulate. Only a machine could do this,” he says with eagerness appropriate to a new-wave innovator. “Everybody aspired to be a robot — we didn’t want any human element in there at all, so people sang in a very robotic way. It was not going to sound like Jimi Hendrix. It was going to sound like a watered down version of Kraftwerk.”

❚ MIDGE IS THE ONLY PERSON AMONG THE NEW ROMANTICS to go on record and acknowledge the role of Gary Numan, an otherwise dread name who was perceived as an aloof and unclubbable loner. He definitely never signed in at the Blitz. Yet as 1979 unfolded Numan’s dystopian sci-fi synth sound sidestepped the Blitz Kids to reach No 1 in the UK charts, twice: in May with Are Friends Electric? and in September with Cars. They were blatantly commercial records and that wasn’t how Blitz Kids defined cool.

But Ure recognised Numan had broken down barriers of disapproval within the old guard of the music biz. He was being a great spur. Ure dreamed up the name Visage for his new band who knocked out a demo covering the classic In The Year 2525, with Egan on drums and the eye-catching Strange posing away as vocalist after a few lessons from Ure. Despite music industry scepticism, it won them a deal with Radar Records, the attention of producer Martin Rushent who had an office above the Blitz, and helped rope in Magazine members Dave Formula, John McGeoch and Barry Adamson, and Ultravox keyboardist Billy Currie. A single called Tar was released that September. It didn’t chart, but did clinch them a bigger deal with Polydor in 1980.

The day job: in 1979 Midge Ure (moustachioed) resurrected the name of Ultravox along with (l-r) Warren Cann, Chris Cross and Billy Currie. © Getty

Ure says: “Visage was never really a proper band, just a group of our favourite musicians who we brought together to make experimental music for the Blitz club. Because they were all signed to other labels we chose Steve Strange as our frontman because he looked the part.” This worked well enough. Even while Ure and Currie part-timed with the seven-man studio-only Visage line-up, while steering Ultravox along similar synth-pop lines, Visage put out two successful albums, and a handful of chart singles (the most enduring being Fade to Grey in November 1980). What laid the pathfinding flares for the movement were some uber-stylish art-videos — the first starred Blitz coat-check girl Julia Fodor before she became the fabulous princess and deejay — which disseminated the OTT New Romantic ethos for fans to emulate.

Ure scored the significant double of taking Ultravox’s majestic Vienna to No 2 a month later and for four weeks, then seeing it win Single of the Year at the 1981 Brit Awards. It was produced by the German Conny Plank with an evocatively romantic landmark video stunningly directed by Russell Mulcahy who was creating a whole visual vocabulary for the then novel music video. Ure can take full credit as lead singer and guitarist for breathing a subtle blend of Roxy Music’s style and krautrock clarity into Ultravox and building them into a credible vanguard for the electronic New Wave.

Reflecting back in the R4 doc, Ure says: “There’s no doubt the early 80s was a golden age of music made by real popstars who created themselves. It was more than just padded shoulders and asymmetrical haircuts. It was a pivotal moment in our cultural history when new tech mixed with new ideas to create something really good. All in the pressure cooker environment that was the Blitz club.”