2010 ➤ OMM goes out celebrating all our heritages 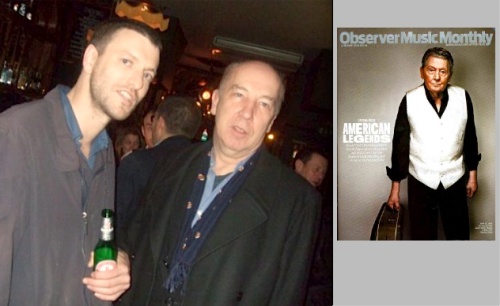 So farewell, then, OMM: editor Caspar Llewellyn Smith with Neil Spencer, iconic ex-editor of the NME, at the wake for the “anything goes” music mag (right). Main photograph © by Shapersofthe80s

❚ “AN ERROR,” said Neil Spencer, who edited the NME during the 1980s, passing verdict on this week’s closure of the Observer Music Monthly as part of a cost-cutting revamp of the world’s oldest Sunday newspaper, The Observer. “It broke the rules and went where other music magazines do not.”

Caspar Llewellyn Smith edited OMM from its launch in September 2003, since when OMM has patrolled the whole musical waterfront, excelling in its considered reportage of the indigenous musics of the third world, while also applying intelligent ears to chart fodder. Its respect for heritage was signalled the minute Spandau Ballet reformed last year. Caspar said: “We need to know the real story of the New Romantics – to overturn the view that it was a silly pop fad.” Unsurprisingly he quickly assembled a mélange of veteran contributors who included Spencer, Peter Culshaw and world-music guru Charlie (The Sound of the City) Gillett.

“A lot of Caspar’s peers haven’t got the same breadth of taste,” said freelance writer Sophie Heawood at last night’s farewell bash at the Albert and Pearl in Islington. “He’s someone who knows where the culture’s beautiful stuff is going on. Where eyes and ears are concerned, his can be trusted.”

Out of 76 issues Caspar said he was over-ruled from above on only two cover images, which is pretty nigh miraculous on a national newspaper. One of his favourite covers announced an unexpectedly revealing 2005 interview with Noel Gallagher, conducted with total irreverence by comedian and total Noel fan, David Walliams. Gallagher admitted to knowing “everything there is to know” about country and western music, and gave an appreciative nod to the 80s: “What struck me was that the boy bands of the day such as Spandau Ballet and Duran Duran could all play their instruments. It’s so far removed from the bands of today like Westlife and Boyzone, who are utter shit.”

Ambrose Campbell: bandleader who died in 2006

Caspar is also chuffed to have championed British rapper Dizzee Rascal since the first OMM. Later, he brought the rapper Roots Manuva together in conversation about black Britain with octogenarian Ambrose Campbell, who led Britain’s first African band The West African Rhythm Brothers in 1945.

Lewis was photographed last year by Jamie-James Medina for the final cover (above). Inside, Ray Davies of the Kinks recalls his first sight of the hellfire pianist on British TV in 1957: “I’d literally never seen anything like it. He had that long curly hair and he was playing with one leg up on the piano. He looked like a complete punk, but really cool at the same time.”

❏ If you missed Caspar Llewellyn Smith’s savvy defence of his own musical odyssey, Pop Life: A Journey by Sofa, you’ll find it still in print here.)